When preparing food at home, you are in full control of what goes in your food. When ordering food from an establishment such as a restaurant, food truck, or hot dog stand situated at the corner, your health is at the mercy of the cook/ server. Unless care is taken during food preparation, storage, and catering, the food served may contain an allergic ingredient or would be a breeding ground for different ailments causing pathogens. Consumption of such contaminated food can cause symptoms as mild as gas formation or diarrhea or as severe as an anaphylactic shock that can land you in the ER.

Everyone has a varying level of resistance to different ailments. Mostly after eating contaminated food, the body’s defense mechanism kicks in to limit the damage caused, by trying to flush out the toxic as diarrhea. Hence, it is one of the common symptoms of most foodborne illnesses. Sometimes, the body’s defense mechanism is triggered for certain food items and this is classified as an allergic reaction. Similarly, carelessness during food preparation can cause foreign contaminants to be introduced which may cause injury to the mouth. This is not classified under food illnesses but the consequences can be a foodborne illness. Hence, foodborne illnesses can be classified under 2 major criteria:

How to prevent foodborne illnesses?

When handling food in a professional setting, contamination prevention can be achieved in 4 easy to follow steps:

It doesn’t matter if you are the delivery guy delivering the groceries, a line cook preparing the food, or the wait staff serving the order, it is important to ensure that the food is only touched with clean hands and prepared in clean utensils. Restaurant staff should use effective cleaning methods such as washing the utensils in warm, soapy water and scrubbing hands together using soap for 20 seconds minimum before rinsing. Pathogens spread fast from wet hands, so always pat yourself dry with a paper towel or a clean hand cloth.

Disease-causing pathogens cannot survive in alcohol-based medium, so hand sanitizers are great for disinfection but shouldn’t replace hand washing. Regularly wash and sanitize all the surfaces and equipment used for food preparations. Use chlorine bleach as a sanitizing medium when cleaning the utensils and serving plates.

In the storage stage, the chances of cross-contamination are very high if all the ingredients are placed in contact with each other. Similarly, if a utensil is used without washing prior, the flavor and the pathogens are easily transferred into the next food. Always keep raw meat, poultry, or fish in separate bags to prevent their juices from mixing with other food items. Keep the vegetables and meat in physically separate bags. Only disposable plastic bags should be used for storing meat, which should also be disposed of after use once. For re purposability, you can also use plastic-lined reusable bags.

During food preparation, thoroughly wash your hands before touching the food or any utensils. Always keep separate cutting boards for meat and vegetables. Never reuse the marinade used for seasoning the meat. Keep in mind during food storage, always keep the raw and uncooked meat in the bottommost rack of the freezer. While thawing, make sure the meat is placed in a plastic bag and brought to room temperature naturally. 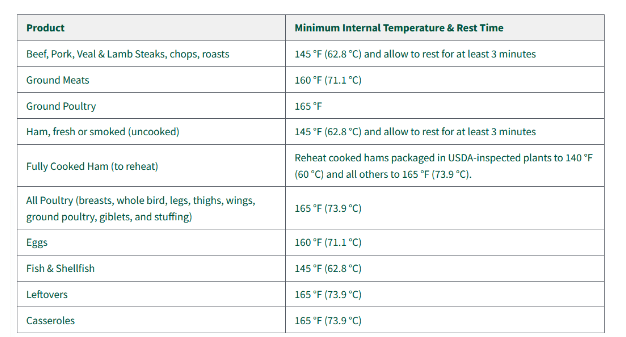 When heating soups or stews, make sure they reach boiling to have an internal temperature of 160°F. Use a meat thermometer to constantly monitor the temperature while cooking the meat. While serving the food, it should be piping hot.

Never leave cooked food at room temperature for more than 2 hours. When the meat is to be cooked, thaw it naturally while covered in a plastic bag. When thawing food in the microwave or cold water, cook it immediately. When transporting perishable food, always use a cooler or gel packs. Portion out your food into smaller containers for quick cooling.

Due to globalization, more and more severe forms of dangerous pathogens are being discovered. Hence, the demand for strict food safety guidelines is ever-growing. The above information will prepare you for different sources of foodborne illnesses as well as the prevention tips. For better preparedness, it is better to undertake a food handlers course that trains you for different aspects of food handling professionally.