Guidelines by the USDA recommend that pork should be cooked to an internal temperature of 145 degrees, 20 degrees less than the previous standard 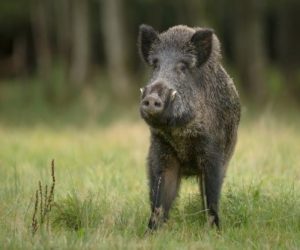 of 165 degrees. The change is because there has been a major decline in Trichinellosis in pigs. The reduction comes from inspection programs that have been in place for many years and strict agricultural and food processing standards.

Historically, trichinae infection in pigs was associated with feeding raw garbage to pigs now the agricultural standard is the garbage must be cooked to eliminate the parasite before being fed to the pigs. But if privately raised pigs or wild boars eat raw or undercooked garbage such as meat scraps, and table waste their meat could pose a risk for the trichinae infection. Also, wild boars often eat rats, raccoons, skunks, and opossums’ animals that have high prevalence rates for trichinate. 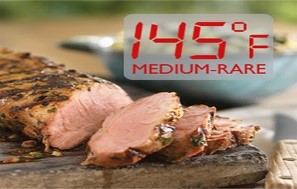 “Our consumer research has consistently shown that Americans tend to overcook common cuts of pork, resulting in a less-than-optimal eating experience,” said Pamela Johnson, director of consumer communications for the National Pork Board. “The new guidelines will help consumers enjoy pork at its most flavorful, juicy – and safe – temperature.”
However, the USDA recommends that consumers of fresh pork including wild boar cook the product to an internal temperature of 165 degrees.

12 cases of trichinellosis were reported by people who attended an event at which larb, a traditional Laotian raw pork dish was served. The implicated pork came from a domesticated wi 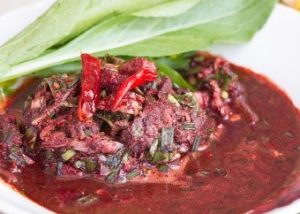 ld boar raised and slaughtered on a private farm in Northern California; leftover samples were found to contain Trichinella spiralis. Nine infected persons were hospitalized with sepsis and seven had acute kidney injury.

Cultural practices that involve the consumption of raw meat might place certain groups at a higher risk for the Trichinella parasite. The Centers for Disease Control and Prevention recommends efforts to provide education to private framers, hunters, and communities that are at risk to reduce the risk for infection.